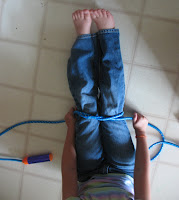 It was one of those eventful moments of parenthood, a milestone in your child's life and one that you were an integral part in helping them to achieve - the tying of shoelaces. I do admit that I was not a parent that pushed this skill at a young age, mainly due to the fact that my three children were "at a young age" all at one time (only 3 years between my first child and my last child - plus add my Sunshine in the middle). Those early years are a giant haze (a happy haze, but nonetheless a haze!) However, my child had shown interest in learning and that was important. I had to seize the moment.

We were outside, she ran in to get her "tie shoes" as we called them. She brought them back out and was determined to get them tied. I did not interrupt, just observed. I loved watching her concentrate. After about 15 minutes, she looked up at me and asked for some assistance. I smile and was ready to be "Wonder Woman" and save the day. 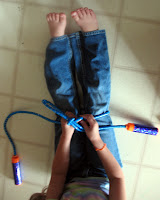 I bent down and started to show her the first step- cross the laces to make an "x." We practiced this step until she was a master. "This was going to be a piece of cake," I thought. Then, I went to show her the second step. This is when reality hit. She leaned over trying to see my hand movement, she could not get a clear picture. We tried from different angles.

Finally, I looked at her and said, "You know, I have taught children many different skills over the years, but I have not had to teach anyone to tie their shoes. I am going to have to think about this and we'll try again tomorrow." Thankfully, she is a very flexible child. She nodded and went on to catch a few fireflies before we had to go inside.

I racked my brain, thinking of a better way to teach her to tie her shoes. I decided to "google" it. Gratefully, I found a tip that helped us get over our obstacle. On eHow, there was an article outlining the steps in how to teach a child to tie their shoes. It was the same old routine, however, the bottom of the article contained the most valuable piece of information --- use a jump rope so they can see a larger view of what is happening.
I found our jump rope and practiced a couple of times that night. The next morning, I informed my Sunshine that I thought I had found the solution. Sunshine sat down on the floor and we placed the middle of the jump rope under her legs (right above her knee area). I was sitting right behind her so I could reach over and demonstrate the steps one at at time. I crossed the rope, she practiced a few times until she mastered. I tucked the rope under. She tucked the rope under until the skill was mastered. I made the loop-she made the loop. We swooped and pulled under and tightened. We stopped at each step and practiced until we mastered  the steps before going on to the next. The entire "lesson" took about 20-30 minutes. I quietly tiptoed away as she twisted and looped for the next 30 minutes. She was actually independently tying. Now, I said, let's try it with your tie shoes. She transferred the knowledge seamlessly. By the end of the afternoon, she was tying as quickly and skillfully as a child who had been tying for a year! Thank goodness for Google!
Posted by Montessori For Learning at 12:49 PM